Read about Fastems at Tewkesbury 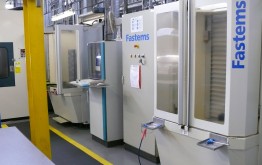 Over the last 18 months, more than GBP 3m has been invested at Tewkesbury subcontracting plant of Kenard Engineering, following a change in operational strategy. As a result, a significant increase in business has been achieved with the marine, rail, oil and gas, aerospace, motorsport, defence and telecoms sectors.

The Tewkesbury business is not just a subcontract machinist. Under Alan Harding, operations director, Kenard has become deeply involved with contract chain management of complete projects. This he maintains: ‘Has transformed the business and already accounts for around half of the company turnover.’ The recipe for attracting new and often complex projects is based on Kenard being able to apply and capitalise on its strong production engineering, quality control and manufacturing IT skills which are so much in demand, but of late, not so readily available in the manufacturing sector due to economic restraint and the growing shortage of skills.

For instance, from the level of engineers employed, Kenard is able to provide value engineering and a design for production consultancy and is willing to take complete responsibility for part sourcing, sub and final assembly and provide direct to line quality guarantees. And such has been the success of the operation, that it can proudly boast a 98 per cent delivery performance. It has also recently won its first e-manufacturing type approval from a customer for sheetmetal supply and component machining to add to its aerospace and ISO 9001 2000 accreditations.

Harding agrees that so many OEM and subcontracting companies now face ‘cost-down’ dictates and ‘lean’ activities and it is here that Kenard can step in to provide the level of input to projects that customers would have had available as a resource in-house just a decade ago. ‘We now have activity meetings with customers, share ideass – even at times this can involve competitors that are included’, to which he adds ‘You have to be professional today and totally geared to service the customer.’ Not hampered by investment restraint on the 147,000ft2 site, the business has been geared to install necessary equipment to meet the needs of the project to which Harding outlines: ‘We recently spent over GBP 50,000 to install a carbide and specialist coating facility, a new machining facility for EP4 epoxy glass as well as Pro-ENGINEER design, Licom programming and new scheduling systems’. ‘You need this level of proficiency in the business to service the type of customers we are now working with,’ he maintains.

Further investments have been made in sheetmetal facilities with an additional 4,000ft2 of factory area alongside the fabrication shop that now houses a CNC punch press, CNC press brakes and a CNC laser profiler. These installations have formed the mainstay to regenerate sales with defence and telecoms customers. In one area of final assembly, the supply chain management philosophy is depicted in the assembly of navigation equipment.

Ongoing defence projects include the machining of fighting vehicle turrets and gun cradles, as well as armour plated hatches all of which are produced on an Hitachi Seiki HS 500 horizontal machining centre with 11 pallets, a Mitsubishi MH 630 twin-pallet and two large 1100mm by 1010mm by 750mm capacity Olivetti machining centres. A high priority of Kenard is to invest in the latest low or totally unmanned production capabilities and here, a line of five, four-axis Mitsubishi MH 500 horizontal machining centres with 12,000 rev/min spindles are installed as part of a 72 pallet flexible manufacturing system (FMS).

The FMS is currently producing aluminium castings and steel valve blocks unmanned using full in-cycle probing and sister tool replenishment. The system with its scheduling software is geared up to produce frequent or repeat batch orders as small as two or three parts against short delivery times. As a result, contracts are being won due to the high efficiency of the line and ability of Kenard to respond quickly to short order demands. But as Harding describes, quite a lot of work now involves prototype machining, initially out of solid material for testing or pre-production. ‘Here our in-house skills help but we also have a local source of highly skilled and IT aware people resulting from cut backs in manufacturing in the Swindon, Bristol and Cirencester areas which can help to grow the business as required.’ These same areas have also been a major source of new business for the same reason especially from the aerospace and rail industries around the M4 and M5 motorways and up to the M6.