Find our more about Kenard 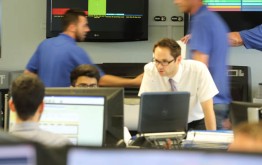 In November Dartford bid farewell to Con Duffin. Before he left we had the chance to ask him how he felt about retiring after nearly 30 years working for the company. Here’s what he said:

On retirement: I’m looking forward to it but I’m sure it’ll be a bit strange at first. I’m just going to take it as it comes – I’m pretty versatile. The 30-year milestone would’ve been nice, but my second grandchild is due around Christmas time and my daughter’s not long moved into a new house, so I’m going to be doing DIY jobs to help get it finished in time. Then with a 7-year-old grandchild I’m sure there’ll be school runs and holidays tucked in there. I’m lucky, I’ve got a close-knit family. They’re taking me away somewhere the weekend after I finish at Kenard but they won’t tell me where!

On his earliest memories of working at Kenard: When I started we were in the old Gafac building, then the move to Princes Road and here, so I’ve seen it grow from being a little company with only a few machines to quite a big company with all the modern technology. I remember Paul Rose was very helpful when I started, he was the Production Manager back then. Everyone was friendly, it’s always been a friendly company.

We used to get some really complex jobs through, which I enjoyed but we didn’t have the technology back then to do it like now. I’d have to grind all the tools for the job.

So, when you’re working tight tolerances, with hard metals and short batches – sometimes only making 1 or 2 offs or so – it seemed like we were always setting up. I quite enjoyed it though, you were always trying to find ways around problems. It made the days go quickly too. Now with the new technology, we’ve got all the tools for the job. That’s one of the reasons I like this company, we’re always moving on with the times.

On how the job’s changed over the years: I started off as a trainee toolmaker in a 2-man run company and then trained up in all conventional machines and fittings before I joined Kenard in 1988. I spent the first 14 years on the day shift. We were doing more Communications work back then and we had so many pallets running on the machines unmanned, we had to keep them going. After that I moved onto night shift, which I’ve been doing for nearly 16 years now.

On working for Kenard: Before coming here, I always did about six and a half years in a firm before I moved on because I got fed up or the company went bust. You’ve only got to look round at how many people are long term service at Kenard. Some places just want to get work out the door but Kenard always wants the job done right. That’s where you get your satisfaction from, getting something done right, and I think that’s why people stay here. The work we do is good work. It’s nice to know that my work has been appreciated.